Biotechnology or Microbiology? What to choose?

Biotechnology and Microbiology are two major disciplines of Biological Sciences with a diversified application related to their domain. Biotechnology refers to a field dealt with the manipulation of living organisms at the molecular level through recombinant DNA technology also known as genetic engineering to form useful products for the betterment of mankind. Microbiology is an area of science exploring the world of microbes in terms of their genomics and proteomics and their applications in food, pharmaceutical, and biotech industries. In the historical perspective of biological sciences Biotechnology and Microbiology developed in parallel. The age-old method of fermentation technology in which microorganisms were used to produce commercially important products is an example of collaboration between these two fields. Understanding the science behind naturally occurring fermentation of sugar and fruit mashes to alcohol by microbes comes under Microbiology. Biotechnology later took the credit of developing the fermentation technology for mass production and commercialization of alcohol. This article is going to provide an outlook on these two important courses in terms of knowledge, application, and job prospects.

The course of Biotechnology drives with a vision of “Heal the world”, “Fuel the world”, and “Feed the world.” Several discoveries and developments 1950 onwards revolutionize the process of genetic engineering when scientists were able to modify the genome of microbes, plants, and animal cells for recombinant commercial production of biomolecules and other purposes. With the rapid growth in world population biotechnology is an important domain to `answer the challenges of food and nutritional requirements, diagnosis and treatment of diseases and fuel needs. Studying biotechnology have the advantage of covering several different disciplines like general biochemistry, genetics, microbiology, molecular biology, etc. The knowledge in those different disciplines nurtures the mind of biotechnologists for innovations. The subjects of animal biotechnology, nano-biotechnology, and microbial biotechnology are useful to learn the techniques for designing new targeted drugs for the treatment of diseases with low side-effects and devising new smart nano-sized tools for early diagnosis. Similarly, in plant biotechnology, genetically modified plants developed in labs can empower mankind for increased production of highly nutritious food with a low spoilage rate. Biotechnology also uses fermentation technology of microbes in the production of biofuels like alcohol and bio-hydrogen thus reducing the dependency of society on petroleum like conventional fuels.

Microorganisms are present everywhere around us, on us, and within us and play vitally important roles for maintenance of life on earth. Microbiology is a science to understand the biochemistry, genomics, proteomics, pathophysiology of invisible microbes for their application in food, fermentation, pharmaceutical, and biotech industries. Microbes include bacteria, fungi, viruses, prions, protozoans, algae and they have an important participation in nutrient cycling on earth,  biodegradation/bioremediation, food-spoilage, disease pathogenesis, and analysis of climatic changes. Studying microbial biochemistry and genomics helps microbiologists to understand the biological mechanism of these microbial lives. On the other side Food technology, microbial biotechnology and industrial microbiology subjects focused on the application of versatile microbes in industries such as the development of vaccines, antibiotics, dairy, and food supplements (probiotics). Microbiology also helps us to understand the microbial diversity and their evolutionary aspects of life on earth. It can answer a big question on the emergence of the first life on earth. Currently, the researchers are trying to identify the function of the microbiome (microbial population in our gut) in combating cancer, Parkinson’s, and Alzheimer’s diseases. 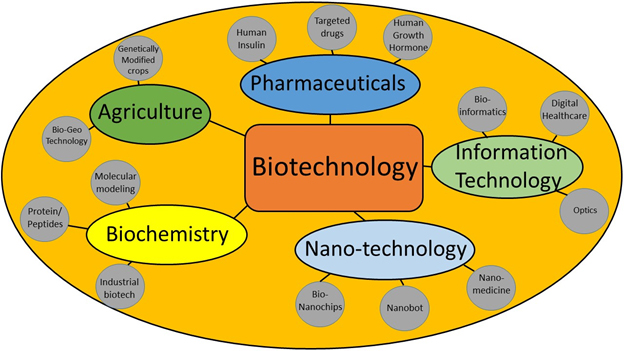 Thus, Biotechnology and Microbiology both seem to be close and interlinked to each other, there are differences when it comes to jobs and prospects. As we have seen that biotechnology depends partly on different laboratory methods of microbiology, but the applied part of microbiology is completely dependent upon biotechnological methods. Therefore, a bachelor degree in Biotechnology can pave the way of aspirants to a various different area of work which may include industrial processes in different types of industries (agricultural, pharmaceutical and medical), research and development along with management jobs, while Microbiology degree can offer you jobs mainly in research and development and some specific industries.  B. Tech degrees in Biotechnology with initial exposures to engineering subjects like computer sciences and electronics open their job prospects in bioinstrumentation and bioinformatics companies. Currently, MBA in Biotechnology (followed by B.Sc. Biotechnology) is another new and upcoming course offered by several Indian Universities. With the rapid growth in new start-ups on biotech, the job market in India is attractive with more requirements of biotech professionals in labs as well as managerial positions.

The students seeking their career mainly in research with the aim of Ph.D.degree in the future also carries the advantage of having a degree in Biotechnology. Due to the diverse nature of the Biotechnology discipline, the students can more easily switch to other closely related biological science subjects for Ph.D., which can’t be so flexible with a Microbiology degree. There are many Fellowship programs of monetary funding for scholars pursuing a Ph.D. in India, offered by DBT-JRF and CSIR-NET. Further with a master’s degree in Biotechnology and Microbiology, students can also apply for Ph.D. in highly reputed foreign Universities. Former Prime-Minister of India recognized the importance of Biotechnology for the common people of India and established the Department of Biotechnology (DBT) as a part of the Ministry of Science and Technology. DBT is responsible to fund important research going on different institutes all around India. In conclusion, it must be said that both areas offer good career prospects with a bit of an advantage on the Biotechnology side. However, it is the personal interest of a student which ultimately drives their way to the summit of a professional career.

What is the utility of studying microeconomics

Agriculture: A scientific art of cultivation

One of the most diverse and versatile engineering fields is a mechanical Engineering. The field of mechanical engineering touch virtually every aspect of modern...
Read more
By Chetana TV
July 1, 2020
0
Facebook
Twitter
Pinterest
WhatsApp
Linkedin
Email

Math-magic: A gateway to excel your efficiency

Mathematics includes the study of such topics as quantity (number theory), structure (algebra), space (geometry) and change (mathematical analysis). It can be called the...
Read more

The contribution of RICE in the field of education in West Bengal is truly undeniable. Today, more than one lakh students are working in...
Read more

As the Government of India is set to roll out the COVID-19 vaccine in the coming days, UGC has sought the personal intervention of...
Read more

Central Teacher Eligibility Test (CTET) January 2021 conducted by CBSE admit cards are being downloaded from the website. Admit card can be downloaded with application...
Read more